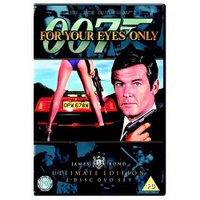 For everyone who was underwhelmed by the slimcase packaging on MGM's recent Region 1 James Bond sets, or perplexed and dismayed by the weird order they put them in, there's good news... sort of.

MGM will release the titles individually next year! (Presumably in regular DVD cases, since slimcases are seldom sold individually.) The catch is these are single disc, vanilla editions, not the 2-disc Special Editions included in the sets. They'll just be the first disc of each set, with only audio commentaries in the way of extras. But they will, at least, be the new, Lowry Digital remastered versions of the movies.

The first wave hits shelves February 6, 2007 and will include Goldfinger, Thunderball, The Spy Who Loved Me, For Your Eyes Only, Licence To Kill and GoldenEye. The single discs will retail for $14.98.

I don't know what the artwork will be yet, but I'm guessing it will be the same as the discs in the collections, which is the same as the already available, individual Region 2 DVDs in England (pictured).
Posted by Tanner at 7:06 PM