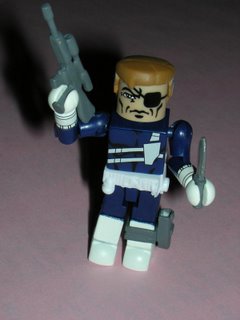 Aw, isn’t he a cute little tough guy? The latest line of Marvel MiniMates (lego-like figures) is now in stores. They’re packaged in two-packs for about $8, and one of the two packs is Captain America and NICK FURY!!! Even though Marvel cranks out hundreds of action figures in all shapes and sizes every year (dozens of them variations on Wolverine alone!) Fury figures are pretty rare. The only other ones in recent memory are the amorphous Hero-Clix game piece which looks nothing like the one-eyed super-spy, and the definitive Fury figure in the 8 inch Marvel Legends line, which is now out of print. If you prefer your action figures more adorable, this is the Fury for you! Check your local comic shop.
Posted by Tanner at 11:27 PM