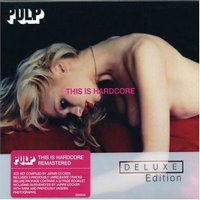 A recently issued 2-disc Deluxe version of sublime 90s Britpop band Pulp's album This Is Hardcore features a "rough mix" of their rejected title song for the Pierce Brosnan Bond movie Tomorrow Never Dies. Pulp worked with Bond composer David Arnold on his essential 007 tribute album Shaken And Stirred (a top-notch collection of Bond song covers by the likes of Aimee Mann, Iggy Pop, David McAlmont and more which spawned the popular Propellerheads single "On Her Majesty's Secret Service") and presumably tried to parlay that relationship into recording the theme song for the next movie. Clearly, they were barking up the wrong tree since Arnold didn't even have enough clout to get his own theme song in the title slot. Instead, it ended up as "Surrender," the closing credits song performed by k.d. lang. Sheryl Crow got the title song, "Tomorrow Never Dies," despite Arnold's "Surrender" theme recurring throughout his score. (I happen to quite like both songs, even though many Bond fans dismiss the Crow one.) Anyway, Pulp's version was re-recorded as "Tomorrow Never Lies" and ended up as a B-side on the single Help the Aged. Now, for the first time, we can finally hear how it sounded in its original Bondian version as "Tomorrow Never Dies."

Overall, it's an interesting curio for a Bond fan, and an essential purchase for a Pulp fan. I love Pulp, and I really like the song (though I prefer the B-side version to the sparser demo offered on the new set), but ultimately the song just lacks the Bond sound essential to any Bond theme. Lead singer Jarvis Cocker is more of a whisperer than a belter, and that just doesn't work for 007, in my opinion. (Although I do actually prefer his Shaken And Stirred version of "All Time High" from Octopussy to Rita Coolidge's original version. Go figure.)
Posted by Tanner at 5:07 PM