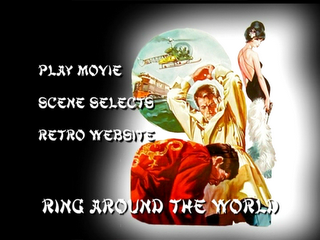 Retromedia recently issued the Eurospy title Ring Around The World as the "B-side" of a Richard Harrison double bill DVD headlined by a sleazy, low budget 80s cop/vigilante movie called Terminal Force. Why that rates primary feature status I don’t know. Yeah, there’s probably not a huge market for 60s Bond knock-offs, but it’s got to be a bigger market than the one for obscure 80s cop movies, right? Maybe I’m just biased. Or maybe they just did it that way because they had a better quality print of Terminal Force. Whatever the case, that movie gets a widescreen presentation and audio commentary from Harrison; Ring Around the World gets a grainy, poorly cropped fullscreen presentation and chapter stops. (Six of them!) Still, that’s enough to make the title worth a purchase–or at least a rental, if you can actually find it–for spy fans.

Richard Harrison starred in quite a few Eurospy movies, but this is the first one I’ve seen. My girlfriend and I spent most of the movie trying to figure out whether he was a doofus or a lug, and I think, in truth, he’s a bit of both here. As Fred Lester (is that a hero’s name or what?), he dons a pair of glasses that may be intended to make us think of Harry Palmer, but end up looking more Clark Kent instead. See what I mean? Lug. (Kind of a Matt Damon-y lug.) Whichever term applies, I mean it in the best possible way. A likeable, somewhat slow-witted, everyman sort of hero who’s never ahead of the audience when it comes to figuring out the plot. He has a great moment near the end when he does actually discover the identity of the villainous ringleader (long after the audience has guessed it) and he pauses to allow himself a congratulatory smile. He’s truly pleased with himself! You can’t help but root for that kind of doofus.

Ring Around the World belongs to that very strange subgenre of Sixties spy flicks, the "insurance investigator movie." Yes, Fred Lester is not a secret agent, but an insurance investigator, just like Bulldog Drummond (Richard Johnson) in Deadlier Than the Male and Some Girls Do. I’m not sure who decided that insurance investigators led the same glamorous, violent lives as spies, and I don’t know if there are actually any other examples of this subgenre (though it wouldn’t surprise me), but three movies is already enough to provoke discussion. (Maybe you can take a class at some film school in the country on "Masculinity in the Heroic Insurance Investigator Film of the 1960s." That would be the greatest film school in the world!) So, anyway, the bespectacled Fred Lester works for an insurance company, which makes him even more of a doofus than previously imagined. (No offense to any insurance investigators reading this blog!)

Lester is assigned to investigate a series of murders around the world in which wealthy victims’ huge life insurance policies benefit the same bank. His investigation takes him from London to Rio to Brasilia to Hong Kong, and the movie actually appears to be shot on location in all of those places, which elevates it at least a notch above certain rival Eurospy flicks that clearly never left Spain, no matter where they were supposed to be taking place. In the course of his journey, Lester gets in several fights, a couple of car chases, and, most impressively, a midair fight over a single parachute while plummeting towards earth. This stunt preceded the similar (though decidedly more impressive) James Bond sequence from Moonraker by more than a decade, and makes for a nice set piece. The movie’s other major set piece comes in the finale, an extended machine gun shootout in a beautiful Hong Kong sculpture garden. It’s a great, exotic location and the film makes ample use of it. (The incredibly informative poster "davidfoster" at the Eurospy Forum says it's called Tiger Balm Gardens, or Aw Boon Haw Gardens.)

Jack Stuart (aka Giacomo Rossi-Stuart) is suitably suave and slimy as Lester’s primary adversary, whom he encounters several times throughout his mission, not just at the end. He’s smarter than Lester, and always one step ahead of him, which leads to several genuinely clever plot twists which I won’t reveal.

Unfortunately, Ring Around the World is a letdown in the one category that you can usually count on from even the worst Eurospy movies: sexy spy babes. While Lester does encounter a few attractive distractions along the way, he doesn’t have time to pay them any attention until he meets Mary Brightford, played by Sheryll Morgan (aka Helene Chanel). Not only does Miss Morgan lack significant acting skill (not a requirement for Eurospy stardom), but she’s unfortunately not very sexy either. While Harrison exudes a certain luggish charm in most of his scenes, it sadly evaporates when confronted with Morgan, and their scenes together come off as kind of creepy.

Still, the stunts and the fights are enough to recommend this movie, which is a fun, fast watch. It’s got a good bad guy, great locations, a great Bondian score (by Piero Umiliani), and remains thoroughly entertaining throughout. Furthermore, I like the doofus. I’m keen to see more Richard Harrison spy movies, and I hope he maintains his doltish charm even without the nerd glasses. 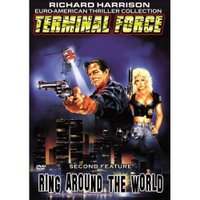 The quality of the DVD itself leaves a lot to be desired. It looks like a bootleg-quality print, though I hear it’s actually a better print than the available bootlegs. It’s the kind of movie that might prove a revelation if one were able to see it on the big screen, on a pristine, 35mm film print. Until one of those turns up, though, this DVD is what we’ve got, and, as with whatever Eurospy titles are actually available, we have to be thankful for what we’ve got. Retromedia deserves credit for releasing this, in what is no doubt the best quality possible given their resources.
Posted by Tanner at 11:33 PM

There is an antecedent of the "international insurance investigator" genre: "The man inside" (1958), where Jack Palance plays Milo March, detective/spy created by M.E. Chaber. The series of novels featuring this character consists of 21 books, perhaps the longest of this type of investigator.

Oh yes! That's a good one. An OSS 117 in all but name and profession, from Jean Bruce.