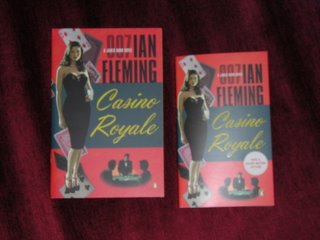 Penguin's official paperback movie tie-in edition of Casino Royale is currently all over the shelves at your local bookstore. Strangely, it doesn't feature Daniel Craig movie artwork, like the British edition. It's just the same (excellent, in my opinion) Richie Fahey artwork as the regular Penguin paperback, with the addition of a circle that says "Now a major motion picture!" (Why are book blurbs the only thing that still talk like a 40s Hollywood executive? Who says "major motion picture" anymore?) The intersting thing is, it's a mass market paperback, priced at only $7.99 and much smaller than the $14 regular tradepaperback version that's been available for the past few years. What's significant about this is that this is the first time an Ian Fleming title has been in print in a mass market edition in America in quite some time. (Since the "silhouette cover" Bantam editions in the mid '90s, I think... or maybe the last Signet editions of TMWTGG and Octopussy came a little later.) Penguin's current line (the best looking American editions in decades!) is in trade only. So, it's of interest. Frankly I'm surprised Penguin passed on the opportunity to put Daniel Craig on the cover, and really brand the book like the movie. It probably would have sold a few more copies. And that original Style A teaser poster, with Craig at the poker table, would have made a great paperback!
Posted by Tanner at 10:51 PM