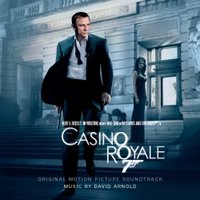 "You Know My Name" single?

As has been widely reported on the web, the Casino Royale soundtrack album will feature only score music by David Arnold, and not the title theme, "You Know My Name," performed by Chris Cornell. This is a first for a Bond soundtrack, and an unfortunate one, in my opinion. Good or bad, the song belongs on the album. And I happen to like this song quite a bit. Sure, it took time to grow on me, but it's definitely very Bondian.

Anyway, there's been a lot of online speculation that the song will not even be released as a single. However, new Casino Royale posters clearly say at the bottom score album on Sony and "You Know My Name performed by Chris Cornell, single on Interscope." So it looks like there will be a single yet, which is good news! Of course, I suppose "single" in this day and age could easily just mean iTunes download, but I really hope there's a physical CD of it too, hopefully containing all the different mixes of the song that have turned up so far.

You can see details of the Casino Royale soundtrack CD at Amazon, but be forewarned if you haven't read the book, the tracklist contains HUGE SPOILERS!!!
Posted by Tanner at 12:48 AM

"A View to a Kill" a.k.a. "Dance Into the Fire" is still THE classic Bond theme.