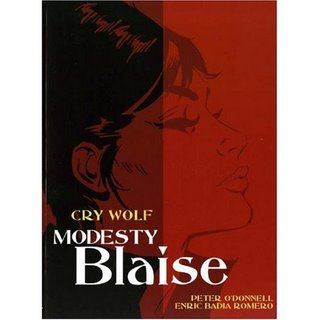 The latest in Titan's supurb series of Modesty Blaise comic strip reprints is now available. Modesty Blaise: Cry Wolf is currently shipping early from Amazon.com or available at your local comic book store. In addition to the title strip, this one reprints the strips "Take Me To Your Leader" and "Highland Witch." Bonus material includes the usual introductions to each story from Modesty creator/author Peter O'Donnell, an interview with him from the 70s, character sketches by illustrator Enric Badia Romero, and an introduction by Russell Mael of the glam/new wave band Sparks. Yeah, that last bit seemed a bit weird to me, too. But then, I didn't know the very interesting connection Sparks turn out to have to Modesty!

Mael explains that they were contacted to write the theme song for the proposed Modesty Blaise American TV series in the early 80s. (I believe this is the one that was to have starred miscast American blonde Ann Turkel as Modesty; only a pilot was ever filmed.) They wrote the song, their record company liked it... and then the series wasn't picked up. But the label wanted to release the single anyway, so they changed the name (but didn't actually re-record the lyrics!) to "Modesty Plays" for legal reasons and released it anyway!

Well, this was very intriguing to me. It meant there was another Modesty Blaise theme song out there that I had never heard! (Johnny Dankworth's infectious theme from the gloriously awful 1966 film is a real guilty pleasure of mine.) I went to iTunes and, sure enough, there it was, "Modesty Plays" by Sparks. You can listen to some sound clips for free, but I went ahead and downloaded it. If you're a big Modesty fan, I recommend you do, too. It sounds very, VERY 80s, and a little too "remixy" to be a TV theme, but it's definitely a Modesty Blaise song!
Posted by Tanner at 8:08 PM

I have the Modesty Blase pilot on Betamax (and a rough VHS copy)... it ran on a early Sunday evening on ABC with no announcement other than a TV Guide listing (I argued with my wife that it was the eariler feature film.. I was glad I was wrong). Those who did see it complained how the Modesty and Willie (along with his bar) were transfered to California, but I thought it worked somehow.
The beginning was quite a grabber... Willie Garvin catching crooks with his throwing knives was exactly how I imagined it from the books, having not yet seen the comic strip.
The rest of the episode was pretty much another detective show, but I sure would of watched it every week!
I will have to download the theme... I barely remember it.
For what it's worth, I really like the new Modesty Blase film, too... it was far better than I thought it was going to be! Take it for what it is... a television movie and you will do fine.

P.S. For what it's worth.. rumor had it the Modesty Blase pilot was bought by ABC, but ABC could not find room on their fall schdelule for it to run, so they dropped it. Modesty has certainly had a run of bad luck in the film indistry, hasn't she?

Lucky you! Drop me a line if you ever feel like sharing that tape at doubleosection[at]yahoo[dot]com. I'm sure I have something good to trade for it...