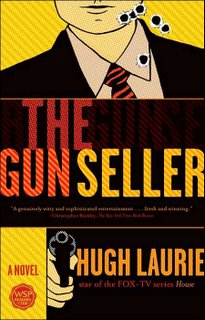 This has been out for a little while now, but it still bears mentioning that actor/author Hugh Laurie’s classic 90s comic spy novel The Gun Seller

is back in print at long last. (Can a novel from the 90s be classic already? Read it and decide for yourself! I say yes.)

, and when he followed his esteemed co-star Stephen Fry into fiction (a spy novel, no less!) I was eager to read the result. I think it got described at the time as "Wodehouse meets Fleming," which is near the mark, but it might be more accurate to call it a Robert Ludlum thriller as written by P.G. Wodehouse. It’s a legitimate Ludlum-style globetrotting thriller, with a hapless hero accidentally thrust into the world of international intrigue and arms dealing, written in a deft comic style surely inspired by Wodehouse, which makes for a hell of a lot more fun a read than Ludlum’s own rather artless prose. The hero is certainly smarter than Bertie (who isn’t?) but his winking narration as he tries hopelessly to understand each new predicament he finds himself in really elevates The Gun Seller above the perfectly acceptable category of "entertaining beach read." It’s been too long since I’ve read it. I should really go back and read this one again, and if you missed it the first time and you’re a fan of spy novels, or Hugh, or both, definitely pick it up! 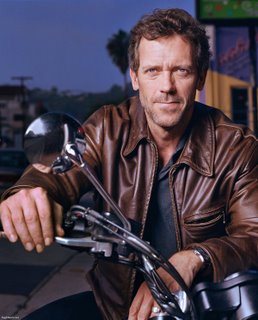 If you’ve seen his British comedy stuff, then you won’t be able to help picturing Laurie in the lead role as you read the novel. (If you only know him from House, maybe not.) It was originally optioned as a film to be written by Laurie and star (I think) Hugh Grant, since Laurie wasn’t a big enough name at the time to sell a movie. Then September 11 happened, and it was scrapped along with any other script concerning terrorism. Now that we’ve moved on a bit from then, and now that Hugh Laurie’s finally the huge star in America that he deserves to be, thanks to the success of House, maybe it will finally get made. Laurie’s a bit old to play the lead now, but he can probably rework it appropriately. He did mention that he was working on the script in a recent Entertainment Weekly interview, though he didn’t mention if he intended to star or not. I hope so. And I also hope he gets around to writing a sequel someday!
Posted by Tanner at 12:22 AM