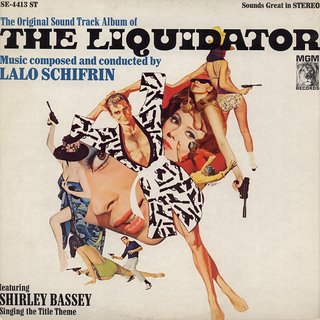 Fantastic soundtrack news! (If a bit old, now.) SpyBopRoyale reports on the Eurospy Forum that Film Score Monthly will release Lalo Schifrin’s complete score to The Liquidator (including Shirley Bassy’s Bassytastic title song: "The-Li!-Qui!-Day!-TOOOOOOOOOOR!") on CD for the first time ever. In fact, it’s available NOW from FSM!

FSM puts out a wonderful series of "Golden Age Classics" and "Silver Age Classics" releasing long out-of-print and highly sought after film scores, remastered, on CD, usually with extensive liner notes and often bonus tracks. They’re kind of hard to find in stores (I still haven’t been able to track down a copy of John Barry’s Alice/Petulia they issued early this year) and tend to go out of print quickly, so you might want to order directly.

The Liquidator, of course, is Boysie Oakes, John Gardner’s pre-Bond anti-Bond. His Oakes books are sort of a direct response to Fleming’s Bond books, and a parody of them. The US paperback covers were suitably lurid in a Sixties way, and some of them are worth reading. None of them, however, scream out "PICK ME TO WRITE THE JAMES BOND CONTINUATION NOVELS IN THE EIGHTIES!"

While there was a whole series of books, there was sadly just one movie, and it didn’t really live up to its am

azing Bob Peak poster, or its classic Schifrin score. Still, it’s worth a look, for sure. And I would scoop it up in a second if someone put it out on DVD! Rod Taylor of The Birds fame stars as Boysie, and Jill St. John’s along for the ride looking great and maybe even contributing just a little bit more to the plot than does her useless Tiffany Case character in Diamonds Are Forever! (The film, that is. Tiffany was actually quite an enjoyable character in the novel.) I guess it didn’t do well to warrant a series, which is a shame.

Taylor did, however, go on to star in another Eurospy treat called The High Commissioner (aka Nobody Runs Forever), which is, surprisingly, on DVD, courtesy of MGM. It plays like an overlong episode of an ITC series, and I think Dahlia Lavi is supposed to be Vietnamese(!), but Taylor and Christopher Plummer each do a great job and the fairly realistic (for a Eurospy movie, anyway!) plot is pretty good.
Posted by Tanner at 11:31 PM