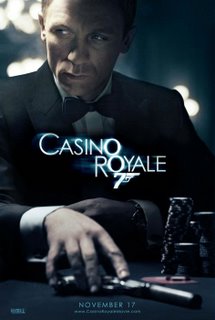 I promised a full review soon when I posted my initial thoughts on the new Bond movie a few days ago, and I'm sorry I'm only just getting around to putting this up now. After seeing the movie three nights in a row, this is how I feel about it. Again, I'll avoid heavy spoilers, but I will address certain plot points, so proceed with caution if you haven't seen it yet.

I really liked Pierce Brosnan as James Bond, but I didn’t much care for his last two outings. They were, in fact, pretty awful, especially Die Another Day. Halle Berry’s redundantly pointed delivery ruined double-entendres for everyone for decades to come, the invisible Aston Martin marked a nadir for gadgets, and that blatantly CGI wave crossed the line from the impossible stunts the series is famous for into implausible greenscreen ones. Something needed to change, and I’m glad the producers realized that despite the last movie’s record grosses.

Casino Royale is definitely a change. And for that alone it will reap loads of well-deserved praise from critics and fans who have been craving something different. It’s a good change, too. A change in the right direction. Less cartoony, more down-to-earth and grounded in reality. But it’s not the first time the Bond producers have made this change. They know when to reel their series in, and that’s what’s kept it so healthy and long-living.

After the volcanic excess (and success) of You Only Live Twice, they gave us the personal, emotional, gadget-free On Her Majesty’s Secret Service. And the box office took a hit. The movies steadily inflated like a Yaphet Kotto balloon until they reached the out-of-this-world overindulgence of the bloated Moonraker, again a bench-mark box office hit. Wisely recognizing that another spectacle of that size would burst like the aforementioned Yaphet, they brought things back down to earth with the gritty (for Moore), real-world For Your Eyes Only. (Which did well.. but not Moonraker well.) And now they’ve done it again, saving and rejuvenating the series just in time. And the box office may well fail to reach the heights of Die Another Day. But the future of the franchise itself is now safeguarded.

In each of these cases, the solution has been to bring Bond back to the source, closer to Ian Fleming. OHMSS was probably the most faithful adaptation they ever did, FYEO very cleverly blended Fleming’s title story with the lesser-known "Risico," and this time they’ve gone as far back to the basics as possible. All the way back to Fleming’s very first Bond novel, Casino Royale.* In the novel, Bond is clearly not the experienced superspy he will become, but I never got the impression that it was supposed to have been his first mission. Still, it makes sense for the film producers to proceed as if it is, and give the series a thorough reboot.

The result is an undeniable success. We follow the cocky, rough-hewn rookie assassin as he learns by making mistakes. Whenever the Bond we know and love would turn left, this version tries right. It makes it difficult to directly compare Daniel Craig to those who have gone before him, because he is playing 007 at such a different phase of his life and career. Maybe a few movies down, he’ll be at the point that we can make better comparisons. For the time being, he does exactly what the script calls for him to do and gives one hell of a performance. It’s thrilling to see Bond become Bond.

As for the stunts, the dreaded CGI is gone. We’re back to unbelievable, breathtaking physical feats performed by people. (Often, it appears, by Craig himself.) The initial foot chase in Africa is really incredible. Daniel Craig has a physicality that no Bond has had since Connery (or maybe Lazenby), and the fights in those days weren’t done in such a way as to take full advantage of that. In other words, the fights in Casino Royale are brutal, believable... and painful.

These action scenes have, of course, been added on to the plot of the book, which had very little action away from the card table. We expect that from Bond movies, though; even when the movies followed the books fairly closely they beefed up the action (like FRWL’s climactic helicopter chase). Storywise, I have no problem with that at this point. After all, I want action in my Bond movie as much as everyone else!

The main action of Fleming’s novel occurs at the gaming table, and he’s a skillful enough writer to make that quite exciting. In the movie, the card game (which has been changed from chemin-de-fer to the infinitely less Bondian "No Limit Hold ‘Em Poker") is shot well, and played more as bluffs between Bond and Le Chiffre, so you don’t really need to actually follow the action of the game. Which is good, because it’s never explained. Fleming explained the game of chemin-de-fer very clearly in the book, and even the American TV version managed that. So it’s a bit of a shame that a poker novice can’t really tell what’s going on with the cards, but certainly not detrimental. There are plenty of reaction shots on Vesper and Mathis to tell us if the hand was good or not, or to alert dummies that "That's the Tell! He's bluffing!"

Late in the movie, Bond is captured and brutally tortured. This is a scene right out of the book, and one that many readers couldn’t believe would ever be filmed. We’ve never seen 007 put through such anguish on screen before. Sounds unpleasant, and it is... but it’s the moment when Craig really, really shines. His performance in this scene is what will solidify his image as Bond for the Jack Bauer generation. This is one tough Bond. The audience actually cheered when I saw it. It’s horrific, but it’s also the movie’s best scene.

Unfortunately, shortly after that comes its worst. The movie falters in its third act. If only they’d just filmed the book, it would have been great. For the whole first two thirds of the film, the filmmakers have presented a very adult Bond movie and treated the audience as intelligent viewers. Before finishing the movie on that note, they cop out and shoehorn in another, completely unnecessary action scene. The high human drama of Fleming’s book plays out amidst the chaos of a gunfight in a sinking Venice building. (I’m not even entirely clear on why the building is sinking.) Sadly, some of the book's best character moments are lost in the action.
This whole sequence feels out of another movie, a refugee from one of the late era Brosnan films. Even though 007 is still capable of superhuman feats, the previous action sequences in Casino Royale are fairly grounded. This one goes for scale, and it’s worse off for it. It’s also awfully reminiscent of the fight on the sinking submarine at the end of The World Is Not Enough.

Still, the whole "wobbly building affair" manages to conclude on a moment of suitably high-stakes emotional suspense, and this leads us into a very strong coda. All in all, the film only steers seriously off course for about ten minutes, but in a movie of this length you feel every one of them.

Martin Campbell, who directed Brosnan’s spectacular debut in GoldenEye in 1995, has managed to make another stellar Bond movie. His direction may not be flashy, but it’s exactly what the series calls for. Despite the radical departure Casino Royale takes with Bond himself, it still looks and feels like a classic Bond movie. Much moreso than Lee Tamahori’s Die Another Day or Michael Apted’s The World Is Not Enough. I’m thankful to Campbell for restoring the beautiful "travelogue moments" that used to be hallmarks–and highlights–of the series. The locations are all stunning, from the Bahamas to Europe. And the camera takes a moment to linger on them as David Arnold’s excellent score (his best since Tomorrow Never Dies) fleshes them out. The Art Direction team has done a fantastic job with interiors as well as exteriors. The casino itself looks exactly how I always imagined it, and its colors are particularly vibrant.

All the performances are first rate, with special attention going to Giancarlo Giannini, who embodies Fleming’s Bond ally Rene Mathis perfectly, and Eva Green as Vesper. Vesper is not a cardboard cutout; she’s a rich, believable and very complex character. I’d say she’s the best female part Fleming ever wrote, and Green really conveys that. Whereas some Bond girls become mere decorations the moment they stop delivering their lines, Green is constantly acting. Even if Vesper is, as Bond puts it, "unreadable," we’re still aware that she’s constantly thinking, conflicted, emotional. As much as I love Michelle Yeoh in Tomorrow Never Dies, I have to say that Eva Green gives the best performance as a Bond girl since Diana Rigg in On Her Majesty’s Secret Service.

Casino Royale is a successful reboot of the Bond franchise, and I can’t wait to see where they go from here. Hopefully we will see Craig’s Bond remain an interesting character, and over several films gradually develop into the suave, cool-as-ice "gentleman spy" who first introduced himself to the world 44 years ago at a gaming table, in the guise of Sean Connery, as "Bond. James Bond."

*This is the third version of that book. Fleming sold the film rights to that title early, resulting in the black and white American TV production starring Barry Nelson as "Card Sense Jimmy Bond" of the CIA. After Albert R. Broccoli and Harry Saltzman bought the rights to the rest of the series from Fleming, producer Charlie Feldman managed to acquire the Royale rights. Realizing he couldn’t make a straight version of the story without Sean Connery at the height of Bondmania, he instead produced a disastrous all-star spoof. Broccoli’s heirs finally acquired the rights, along with MGM, from Sony, as part of some serious legal wrangling that also allowed Sony to make Spider-man. (Then, of course, Sony bought out MGM, so none of that really mattered.)
Posted by Tanner at 1:28 AM