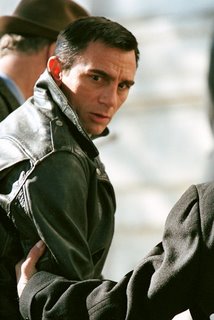 What does this, the infamous "second Capote movie," have to do with spies? It co-stars new Bond Daniel Craig, that’s what. The producers of this movie decided to dye Craig’s infamously blond hair and eyebrows black for the part of In Cold Blood killer Perry Smith. And it works. He looks believable as a brunette. So I don’t know why the Bond producers opted not to. Well, maybe I do: in some shots the darker Daniel actually looks a bit like Sean Connery. (A, er, "rougher" Sean Connery, at least...) Maybe they consciously kept him blond to avoid, or at least lessen, the inevitable comparisons. In some shots he even has something close to the comma of hair Fleming describes 007 as having.

But enough about Daniel’s hair color. How is he? He’s pretty good in this decidedly un-Bondlike role. Craig’s Perry is very different from Clifton Collins Jr.'s Perry in Capote. Whereas Collins played up Perry’s sensitive side more, Craig more embodies his temper-prone, deadly side. Actually, the two performances together add up to accentuate Smith’s dichotemy. Sure, Dan does sensitive, too, like the much talked about kissing scene. He even sings. But you’re always aware that this man harbors the capacity to kill. He’s dangerous. That instinct comes to the surface most in a scene where Perry confronts Capote about the title of his book, In Cold Blood, which he feels will de-humanize him. In the other version, as I recall, Perry was mad but mostly kind of cried about it, pouted, and refused to talk to Truman. Craig’s Perry seizes Capote, shoves a rag in his mouth, puts him in a strangle hold and very nearly kills him. I’m curious which account, if either, is true, but the differences in those scenes ably demonstrate the differences in the two actors’ approaches.
Posted by Tanner at 1:21 AM