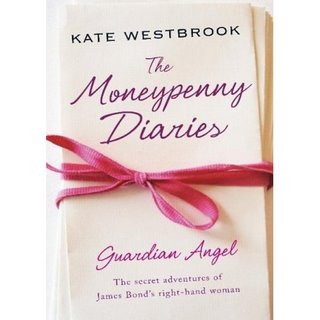 The Moneypenny Diaries Vol. 2: Secret Servant by Samantha Weinberg is now shipping from Amazon.co.uk! Order now! My copy arrived this week, and I can't wait to read it.

Don’t be put off by the incredibly lame chick-lit cover. The Moneypenny Diaries isn’t derivative chick-lit, as I had feared when it was first announced. It sounded like such a blatant attempt to cash in on another successes. First IFP announced their Bond version of Harry Potter (Young Bond), then their Bond version of Bridget Jones (which just seemed like such a weird combination to begin with, and missed the "diary" craze by about two years). But just as Charlie Higson defied expectations and made his Young Bond so much more than a HP ripoff, so has Samantha Weinberg (writing as "Kate Westbrook") done with The Moneypenny Diaries.

The first volume, Guardian Angel, may not have been perfect, but it was a highly enjoyable read set distinctly in the world of Ian Fleming’s Secret Service. Ms. Weinberg had clearly done her research well (although some purists insist on nitpicking about a few little continuity details she gets wrong... but then Fleming wasn’t so good on the continuity either, was he?) and I found myself fascinated to see Fleming’s incredible supporting cast (Moneypenny, Tanner, M, Goodnight), who made such indelible impressions in their brief recurring appearances in his books, fleshed out into leading roles. With the slight exception of 007 himself, the characterizations seem dead-on to me. Like the Young Bond series, which asks us to go along with the shaky concept that James might have stumbled into all these incredible adventures serendipitously as a child, you’ve got to buy into the notion that Moneypenny actually got out of the office from time to time and had a more active role in the Secret Service. But if you can swallow that (which isn’t too difficult, once you start reading), Bond fans are bound to enjoy these books. The best part is that they’re set in the early Sixties, and fit in between events in Fleming’s own novels! This one begins when Bond is presumed dead following the events of You Only Live Twice. So presumably we’ll get to see his less-than-triumphant return (from The Man With the Golden Gun) from the point of view of Moneypenny and the MI6 staff, which should prove especially interesting!

I have no idea why the publisher is marketing them as chick-lit. Maybe IFP was hoping to expand Bond’s readership, but that obviously didn’t work (based on the undeservedly poor sales of the first entry). Now they should focus on the core audience and cater to them. Once again, don’t go by the cover. These are legitimate Bond novels!

Unfortunately, there are currently no plans for publication in the US.
Posted by Tanner at 11:37 PM