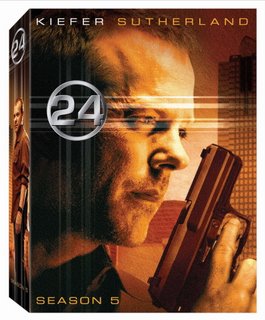 24 Season 5 comes out on DVD on December 5. This time Fox has opted to go with double disc slim packs instead of the usual gatefold, making this this the slimmest and most shelf-friendly season of 24 yet. This seems to be Fox’s preferred packaging these days, as most of their new shows have it (The Unit, My Name Is Earl) and they've been re-releasing old shows with it (Buffy the Vampire Slayer). Personally, I prefer it. It takes up less room, and those gatefolds were awfully cumbersome.

Like Season 4, Season 5 comes with a "prequel" for the new season available only on the DVD. 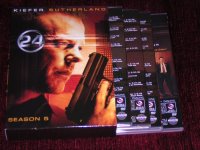 For those who can't wait until December 5 to get their Jack Bauer fix, IDW’s newest 24 comic book debuted this week. It’s different from their previous comics in that it's a mini-series, not a one-shot, and it abandons the gimmicks (like two pages equal one hour, or whatever) and just tells a straightforward story about the characters from 24. It serves as a prequel to Season 1, telling the story of Operation: Nightfall, Jack Bauer’s first encounter with Victor Drazen (Dennis Hopper on t

he show) under the orders of David Palmer. Issue 1 of 6 of 24: Nightfall is out now; a trade paperback is sure to follow down the road.

Also available for 24 junkies is the recently published book 24: Behind the Scenes and a pricey, limited edition version of same that includes an autographed picture of Kiefer Sutherland, who pens the forward. 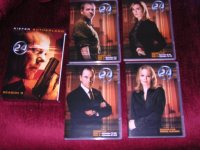 Finally, DVDActive has the artwork for the Series 6 Premiere DVD I mentioned the other day.