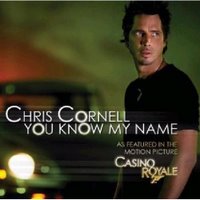 "You Know My Name" CD Single Out December 14

Finally, it appears that Chris Cornell's Bond song "You Know My Name" will be out as a CD single! Amazon is taking pre-orders for an import. Jay Leno held the single up last night after Cornell performed the song on his show, so it does seem to really exist. As previously reported, the song is also available as a download on iTunes.
Posted by Tanner at 10:52 PM