While there haven’t been nearly as many magazine covers devoted to Casino Royale as there were to Die Another Day in 2002, several more have trickled out onto American newsstands. Here are a few to look out for (in addition to those already pictured): 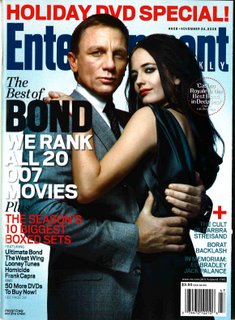 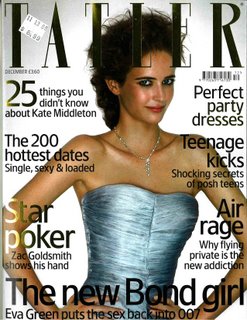 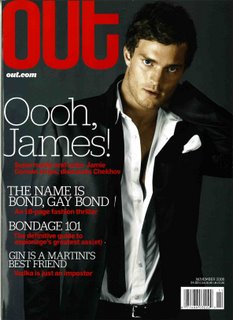 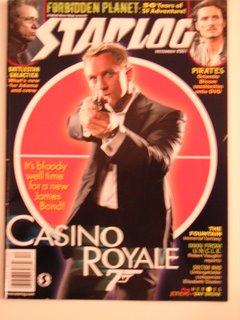 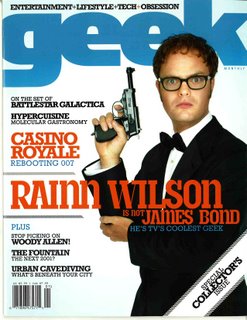 These covers mark Daniel Craig’s second this year for both Entertainment Weekly and Empire. Meanwhile, Tatler, Out and Geek elect to keep him off their Casino Royale covers, perhaps deeming him not photogenic enough. (He’s a great actor and a great Bond... but he doesn’t always photograph so well.) Still, Starlog managed to find a great picture of him for their cover, so it's definitely possible...

It’s the second issue of Tatler in a row for Bond fans to look out for, following the October issue with the Moneypenny story.

The Out, which I’d mentioned before, is an odd magazine for Bond collectors since its most noticeable 007 features are a photo spread with a young male model in gay takes on Bondian situations and a chart (pictured to the right) rating each Bond actor on "shagability" and "gayness." (No offense to any actor or any sexual orientation, but I find it perplexing that Daniel Craig rates the highest in "gayness." I would have thought him the least gay!) Howeverver, it’s unfair to judge the magazine on those two features alone. It’s the only one of these magazines whose theme is entirely Bondian, and there are many other interesting features from top "spy tunes" to recipes for the perfect martini to an interesting article on the Burgess/Maclean spy ring.

The "Connoisseur’s Guide to James Bond" supplement from last week’s issue of the British Spectator has sadly not made it across the ocean with the magazine, so American collectors may want to steer clear of it despite the banner on the bottom half picturing Craig and promising the supplement (which can still be read online, at least).