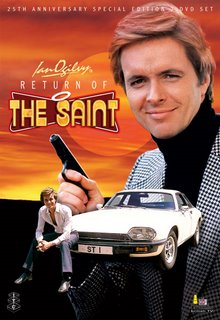 UK's spy TV savior Network DVD will release The Return of the Saint, the 70s Simon Templer revival series starring Ian Ogilvy, on Region 2 DVD in 2007! Umbrella Entertainment in Australia already released an excellent Region 0 PAL set (pictured) last year, but as with their Saint releases this past summer, Network looks set to one up them. As the Network sets of Roger Moore's Saint contained brand new documentaries narrated by Ogilvy, their Return of the Saint set will feature a new documentary narrated by Moore! Man, I wish I could afford to re-buy all this stuff! I'd just like to see these documenatries.

Network have also announced "definitive new editions" of the classic spy series Department S, Danger Man and The Prisoner for next year. Even though The Prisoner has been released many times in many countries, Network claim their new version "is surely the ultimate release featuring a wealth of new special features including restored high definition transfers, a major new documentary and lots of surprises." Sounds exciting!

Furthermore, the company currently have a bunch of their classic ITC series on sale at huge discounts. It's a great opportunity to fill in the gaps in your spy TV collections. To avoid sounding like a total Network shill, I should give due warning to American buyers: some of the Network DVDs I've bought refuse to play at all on either of my multi-region players. Others play fine. So buy at your own risk if you're not Region 2.

In related news, I should have already mentioned that Optiumum Home Entertainment recently issued a new set of Region 2 New Avengers DVDs in the UK. This set is notable because it's the first time there have been audio commentaries on any Avengers release, in this case two by Brian Clemens and Gareth "Gambit" Hunt. Not sure if this is enough reason for American viewers to upgrade their A&E sets, but it's certainly cool.
Posted by Tanner at 2:46 PM