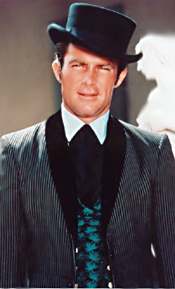 According to TVShowsOnDVD.com, CBS/Paramount has announced a March 20, 2007 release date for The Wild Wild West Season 2. The set will contain all 28 episodes of the first color season. Extras are still to be announced, but if Season 1 is any indication, they should be good! Expect commentaries and episode introductions at the very least.

I’m about halfway through the Season 1 DVDs and I’m really enjoying this show. For those unfamiliar with the series (or only familiar with the Will Smith train wreck), The Wild Wild West is essentially James Bond in the Old West. (Hence the name: James... West! Subtle.)

At the height of the Sixties spy craze, CBS decided to combine the new popular genre with what was still the most reliable old one, the Western. (At the time, all the studios still had Western backlots.) Robert Conrad is absolutely perfect as the tough, suave, debonair US Secret Service agent Jim West. Reporting directly to the President, West travels the West on a luxurious, gadget-laden train car with his partner (and gadget-maker) Artemis Gordon, thwarting the plans of many an Avengers-caliber Diabolical Mastermind. Wild Wild West really is the closest any American spy show came to The Avengers, with its decidedly bizarre plots and eccentric villains, and Jim West is probably James Bond’s closest TV relative. It may be set in the Wild West instead of the Swinging Sixties, but don’t be fooled; Wild Wild West is a spy show through and through. (In its early seasons, at least. According to the impressive bonus features on the Season 1 DVDs, it became a more traditional Western by its fourth season due to budget constraints.) It has everything you expect from Sixties spy television: a catchy theme, a cool hero, impossible gadgets, outlandish plots, beautiful guest starlets every week, and memorable adversaries. I’m very glad that Paramount is going to release more seasons on DVD!
Posted by Tanner at 9:45 PM