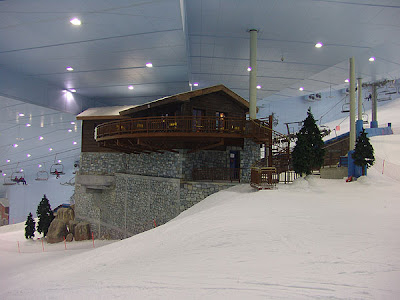 In a special issue last week about filming in the Middle East (print edition only, I think), it was mentioned that besides the much-publicized stunt atop the world's tallest building, the Burj Khalifa, the Mission: Impossible - Ghost Protocol (or M:I-4 to those who don't speak Ludlumese) team was also shooting at a massive indoor ski slope in the desert pleasure dome of Dubai.  There were no details or pictures, but the tidbit was intriguing enough for me to research the location a bit further.  And it sounds like an amazing setting for a spy movie!  (Dozens of Eurospy directors are turning in their graves right now regretting that this place didn't exist in the Sixties.) Ski Dubai is more than an oasis; it's eternal winter right in the middle of perpetual summer.  According to its official website, "Ski Dubai is the first indoor ski resort in the Middle East and offers an amazing snow setting to enjoy skiing, snowboarding and tobogganing or just playing in the snow. The construction covers an amazing 22,500 square meters covered with real snow all year round."  There are chairlifts and everything.  I love the decadance! 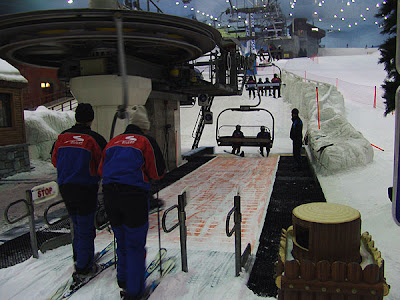 The trade doesn't mention whether it was Tom Cruise, Jeremy Renner, Josh Holloway or any of the movie's many other stars who filmed at this snowy location.  Renner recently confirmed the rampant speculation that he was being groomed to take over the franchise from Tom Cruise to the MTV Movies Blog (via The Hollywood Reporter). "It's a franchise to potentially take over," the actor told MTV. "I can't predict the future and what they want, but that's certainly the idea." He was quick to give due credit to Cruise, adding that he remains the guiding hand behind the film franchise. "It's Tom's baby. He's the engine behind the thing. What happens after that, we'll see."

Rounding out this Mission: Impossible - Ghost Protocol news roundup, today's LA Times reports that filming wrapped in Dubai earlier this week, so whatever was going on at that awesome indoor ski slope is all done now. The fourth film in the series based on the classic TV show opens December 16, 2011, taking advantage of the delay of the next James Bond movie by honing in on the season 007 has traditionally staked out for the last fifteen years.
Posted by Tanner at 2:51 AM