The Mission: Impossible TV series was about a series of ever-escalating, ever more complex heists and cons.  The Mission: Impossible movie series has been about a series of ever-escalating feats of dangling from higher and higher heights.  In the first film, Tom Cruise famously dangled from the ceiling of CIA Headquarters in Langley.  In M:i-2, I think he broke into a tall skyscraper and did some dangling there.  M:I:III (yes, they keep changing the nomenclature) involved a skyscraper too, but eased up on the dangling.  Now M:I:IV (which we all know isn't called that) is making up for that oversight by packing in as much dangling as possible from the highest heights imaginable.  We've already seen some set pics of Tom Cruise dangling from a stunt rig in Prague; now another photo is making the rounds of the web that purports to depict the actor dangling from the tallest building in the world.  That's right, Ethan Hunt has acheived the Everest of buildings, running on the side of Dubai's record-holding Khalifa Tower.  Looks like a very cool stunt.  (I'm not convinced that's really Tom Cruise, though...) 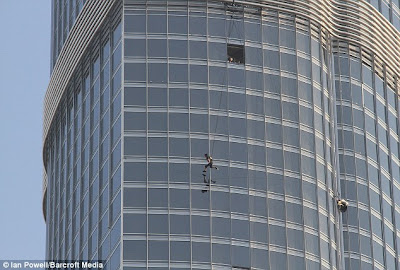