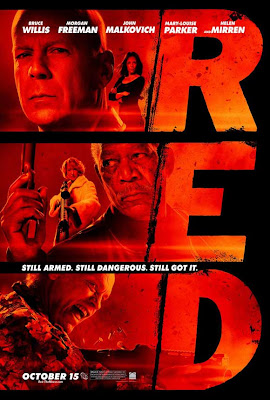 2010 has turned out to be quite a year for spy movies. Thanks to its all-star cast, RED has been on our radar for a while now, and, happily, it lives up to the year’s worth of anticipation. As regular readers have probably gleaned by now from all the casting reports, RED (named after the file designation Retired Extremely Dangerous) stars Bruce Willis as Frank Moses, a retired CIA wetwork operative. He’s not exactly content with his retired life, but he’s at least living it. The notion of a retired superspy could be played for laughs or pathos. RED goes for laughs. This is a guy who once possessed Jason Bourne-like skills, now living a quiet and utterly inconsequential existence in mundane suburbia. He probably never expected to live to retirement age, and he clearly doesn’t know what to do with himself. The highlight of his days seems to be tearing up his pension check so that he has an excuse to flirt on the phone with his account rep in Ohio, Sarah (Mary Louise Parker). At night he reads romance novels about secret agents because that’s what she reads, and then he can discuss them with her the next time they talk.

This quiet and rather pathetic routine is shattered when a high-tech hit squad shows up one night with the aim of eliminating Moses. Of course, he’s long been prepared for this, and keeps a handy store of weapons in his basement along with a go-bag. In handling the hit squad, Frank demonstrates that he still has Bourne-like skills, which doesn’t necessarily serve the movie’s underdog premise. Bruce Willis gives an excellent performance, but it’s honestly a little tough to buy him as a retiree. I know he’s pretty old, but we’re still asked to accept him as a fully-functioning action star in other movies–and his first fight in RED indicates that he is one as well. Part of me wished that they’d cast an even older action star in the lead, like maybe Harrison Ford. Or at least that they’d portrayed Frank as a bit creaky during his first fight scene. Instead he seems half machine. Furthermore, the action itself is somewhat lackluster and quickly and confusingly edited (perhaps so as to secure a PG-13 rating), which proves symptomatic of most of the action direction in the film. Luckily, this action movie is more about dialogue and comedy than action (a departure, I understand, from Warren Ellis' comic book on which it's based), and director Robert Schwentke handles those aspects with great aplomb. That, coupled with the game cast and their infectious chemistry, overcomes any flaws in the action direction. As soon as Frank goes on the run, all such quibbles are quickly forgotten, because the ensuing caper is just so much fun.

Willis heads straight for Colombus to collect and protect Sarah, who he figures (rightly, but I’m not really sure why) will also be on his enemy’s hit list thanks to her long distance “relationship” with him. Things don’t go quite as planned, and it turns out the only way he can protect her is by forcibly abducting her from her apartment, tying her up, and driving her down to New Orleans. (Kidnapping the love interest prompts a familiar spy movie dynamic as old Hitchcock's The 39 Steps and as recent as Knight and Day.) Parker does a lot with a character that could have easily seemed disposable in other hands. Her chemistry with Willis is palpable (somehow I doubt Ford could have pulled that off given their age difference) and she proves a talented comedienne. When he tries to explain that this isn’t how he imagined their first in-person meeting going, she says it wasn’t how she envisioned it either: she hoped he’d have hair. (This is a funny observation, but could have been funnier–and served the old age/retirement angle better, if Willis had played the part with his own natural male pattern baldness that was already evident way back in Hudson Hawk rather than disguising that with a cool guy shaved head! Oh well.) Naturally, she quickly comes to realize that he’s not crazy and people really are after her, and finds it thrilling to live out her secret agent fantasies. 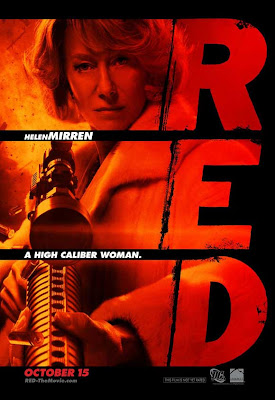 So why is Frank heading South? Well, that’s where he can hook up with former CIA colleagues Joe (Morgan Freeman) and Marvin (John Malkovich). Freeman plays older than his age as an octogenarian retired spy living out his numbered days in a nursing home, and as such embodies a few of the old age possibilities I wish the writers had explored with Willis’ character. Malkovich, as you’ve no doubt seen from the trailers, plays a paranoid psychotic who endured government LSD tests for ten years straight. He’s not all there, but that doesn’t mean he isn’t good a killing people. The old skills have stuck. Malkovich is the comic relief in a movie that’s mostly comedy already, and has no trouble whatsoever in stealing the show. Every line he gets is a howler already thanks to the strong script by Jon and Erich Hoeber, and doubly so in Malkovich’s unabashedly scenery-chewing delivery. Eventually Helen Mirren and Brian Cox round out their team of past-it spies (she as a former MI6 assassin, he, in an effective and uncharacteristically over-the-top comedic performance, as a still-active Russian agent who’s been promoted so far up as to be out of all the action). From the trailers, I’d expected Mirren to steal the show. She is, of course, excellent–and it’s a treat to see The Queen mowing down enemies with a huge machine gun–but the movie belongs to Malkovich. Every line he utters hits just the right note.

It becomes clear that the CIA is behind the hit squads trying to kill Willis and his pals, though the Agency may in fact be being used by shady power figures in the government and that favorite bastion of villainy, Big Industry. Yes, we’re treated to yet another Haliburton-like corporation–with Richard Dreyfuss heading it up, in fact, more or less reprising his Blofeldian Dick Cheney performance from Oliver Stone’s W. The political conspiracy is treated just as breezily as everything else in this candy-coated film, though, and neither bogs down the pace nor requires too much careful attention. Anyway, given the Agency’s culpability, Frank and Co. decide to take the show to Langley where they break in. No, Bruce Willis doesn’t have to do any dangling from the ceiling, but he does escape by pretending to be a fireman! The CIA really needs to learn to start checking the firemen leaving its headquarters after break-ins. Sure, Brian De Palma stole his Mission: Impossible break-in sequence from Topkapi, but I’m still kind of surprised another movie would so closely approximate his film’s getaway. I suppose turnabout is fair play. 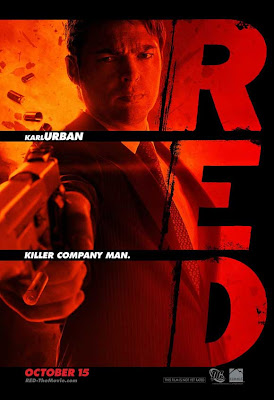 While inside CIA headquarters, Willis encounters both Ernest Borgnine in a great cameo as the keeper of a secret vault as ancient as he is and Karl Urban (The Bourne Supremacy) as the eager young agent leading the task force that’s out to get him. What follows is the best fight in the film, between Willis and Urban. I’ve been a big fan of Karl Urban’s since his Xena days, and was sorry that The Bourne Supremacy kind of squandered him the way The Bourne Identity squandered Clive Owen. Star Trek proved a much better showcase of his talent, and now RED finally displays his action star prowess. Urban makes a great and sympathetic antagonist in what’s probably his biggest mainstream role to date. I still see star potential there, and I’d love to see him toplining one of those Luc Besson-produced neo-Eurospy flicks. Just holding one’s own would be an impressive feat for any young(ish) actor thrust into such illustrious company, but Urban goes one better and actually proves to be one of RED’s best assets.

Still, despite Urban’s impressive turn as the antagonist, Willis’s top billing and Malkovich’s scene-stealing, no one actor dominates this movie. RED proves to be the perfect ensemble vehicle. Watching the third act unfold, I couldn’t help thinking to myself, “This is what a Mission: Impossible movie should be like!” Each team member has their own specialty and gets plenty of screen time to demonstrate it. Each has a distinct personality tailored to the actor or actress playing the part. And the setpieces depend on everyone’s involvement. Ostensible star Willis, in fact, sits out most of the final setpiece, which unspools (to a great score by Christophe Beck that wears its spyishness on its sleeve) at a political fundraiser in a Chicago hotel. He plays the perfect Jim Phelps part, masterminding the operation, letting the specialists handle their specialties, and then swooping in at the end to play his own integral part at the right moment. Like another famous team leader, I love it when a plan comes together, and it comes together beautifully in RED.
Posted by Tanner at 3:51 PM

About time! Loved it!