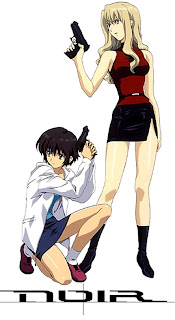 Is Nikita not living up to your expectations for a female assassin series?  Or do you love it, and crave more female assassins on TV?  Either way, Sam Raimi's got the thing for you: um, more female assassins. The Hollywood Reporter reports that Starz has picked up a new series from Raimi and his Xena and Hercules co-producer, Robert Tapert, based on the anime series Noir.  According to the trade, "The premium cable network is developing Noir, a live-action U.S. remake of a 2001 show about two female assassins working in a criminal underworld. After discovering they're mysteriously linked, the two and have to work together on missions (under the moniker of 'Noir') until they figure out why and how they are connected -- or until one of them kills the other."  Raimi and Tapert produce the hit series Spartacus: Blood and Sand for the cabler, and have previously dabbled in the espionage milieu with the short-lives series Jack of All Trades (starring the great Bruce Campbell) and Spy Game.
Posted by Tanner at 5:55 PM

Noir was a great series. I can't figure out why on earth it would need to be remade.

Because the talentless hacks in Whorellywood haven't got two creative brain cells to rub together.

While I respect Tex's passion on the subject and mostly agree with his disdain for the remake-mania and rampant brand exploitation that rules the industry at the moment, I feel that his answer requires expanding on. I'm going to assume that he's using the term "hack" to refer to a generic, faceless studio executive, but since in this town the term commonly means "writer," I want to dispel some commonly held misconceptions.

As one of the countless hacks toiling in "Whorellywood", I can assure you that the studios' penchant for exploiting name brands (be they comic, toy or pre-existing movie or TV show) has absolutely nothing to the "hacks" (a pejorative slang which refers specifically to writers - and was probably most commonly applied to my favorite generation of authors, those who penned the pulps in the 30s and 40s!). In fact, those hacks actually hate this trend more even than the fans, because it directly affects their livelihood.

A decade ago there was still a thriving spec market in Hollywood, though it had already declined from its high-paying 90s heyday. Now there is virtually no spec market. (A spec script is a writer's wholly original idea developed into a screenplay.) Instead, the demand is for scripts based on name brands that audiences recognize, whether they actually know the original characters or not. It's all about brand recognition. Obviously, this hurts screenwriters of all stripes, from those struggling to make their first break to the successful, highly paid scribes whose names you see (and the countless others whose names you don't see) in the credits for the movies based on toy brands who got that job at the expense of the personal passion project they would have much preferred to have seen made.

The economic downturn prompted this trend, and it comes from the STUDIOS and their executives, and categorically NOT from the "hacks." It is never a serious case of writer's block that leads a scenarist to put down his pen and say, "I know! Maybe I'll just go in and pitch a movie based on a product that I don't own that the execs I'm pitching to could easily take to another writer leaving me out of the process rather than pitching an original idea that I own, and that I am bound to be paid for whether my name ends up on the final credits or not." That doesn't happen.

Instead, the more common scenario is a writer going in to pitch an original idea that he or she is passionate about, only to hear that the numbers don't crunch right, and the studio doesn't want to take a gamble in this market on an unknown commodity. In that situation, the best case for the writer in question is that the execs do respond to his style, and offer him a work-for-hire gig turning Mr. Clean into a viable summer blockbuster.

No, the trend for recycling known commodities in Hollywood most certainly does not originate with the hacks, talentless or otherwise. It comes from the top: from the cost-conscious corporations who own and run the movie studios.

Tanner, I agree. And it can only get worse. Even if the economy recovers the movie industry won't. Not with rampant illegal downloading, and with movies facing so much competition for the entertainment dollar.

So the play-safe policies of brand recognition are here to stay.