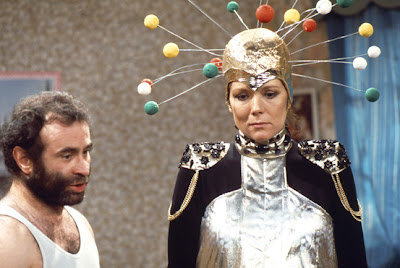 The BBC America Shop Blog is just full of exciting news for spy fans!  The blog reports that BBC Home Video will release a 5-disc collection entitled Diana Rigg at the BBC on February 15, 2011, and TVShowsOnDVD provides further details.  In addition to the previously available 1998-2000 Mrs. Bradley Mysteries

in their entirety, the set will contain plenty of shows never before on DVD including Three Piece Suite (1977), Ibsen's Little Eyolf (1982), Unexplained Laughter (1989) and 1994's Genghis Cohn, which co-starred Daniel Craig.  (That sounds like a weird one.) Perhaps most excitingly of all, it will also include clips from her 1975 appearance on the Christmas episode of UK comedy staple The Morecambe & Wise Show. Three Piece Suite was a sketch show in which the future Dame Diana demonstrated her range by playing three different roles in three different sketches–both comedic and dramatic–each week. (And at some point, evidently, she donned a very silly outfit that looks to have been stolen from The Fantastic Argoman's Queen of the World.) Bob Hoskins and John Cleese were among the guest stars, and the talented writing staff included spy veteran Dick Clement (Otley, Never Say Never Again).

Retail for the set is just $49.98, which seems like a bargain already for all those shows, but the set can be pre-ordered even more cheaply on Amazon, for a mere $34.99.  This has really been a fantastic year for fans of Dame Diana's.  We've already gotten two of her rare, earliest TV appearances on Region 2 DVDs (the Armchair Theatre play "The Hothouse" was a bonus feature on Optimum's The Avengers: Series 4 set, and Network's The Sentimental Agent: The Complete Series included her show-stealing guest spot in the episode "A Very Desirable Plot"), and now we have this comprehensive collection on the horizon. Now if only her impossible-to-find early Seventies American sitcom, Diana (which guest-starred Patrick Macnee) would turn up...  That I really want to see!
Posted by Tanner at 10:20 AM

I pre-ordered this the day it was announced, if only to get the Mrs. Bradley mysteries. Everything else is strictly Riggian gravy!