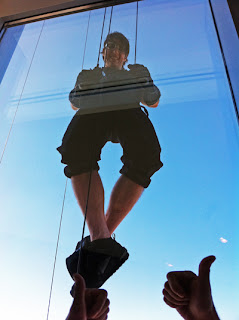 Apparently It Really Was Tom Cruise Dangling Off The World's Tallest Skyscraper!

Following the earlier photos of someone dangling off the world's tallest building in Dubai for a Mission: Impossible - Ghost Protocol stunt (sorry; I have to insert some sort of punctuation if I'm going to type that, even if there's none officially), more photos made the rounds of the web this week making it clear that it was, indeed, Tom Cruise performing his own death-defying stunt!  This picture was taken by a tourist visiting Khalifa Tower.  The tourist also got some video, which can be seen on Yahoo!  Cruise waves and gives a thumbs-up to the surprised tourists inside the building.
Posted by Tanner at 8:00 PM