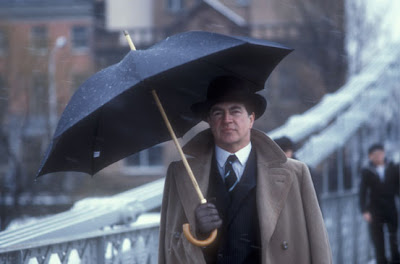 Upcoming Spy DVDs: An Englishman Abroad And A Question Of Attribution

Hot on the heels of announcing MI-5: Volume 8, the BBC America Shop Blog has also announced Alan Bennett's Cambridge Spies teleplays "An Englishman Abroad" and "A Question of Attribution" for release on Region 1 DVD in early spring of next year.  "An Englishman Abroad," filmed for television in 1983 and directed by John Schlesinger, follows English actress Coral Browne (playing herself) on a cultural exchange in Moscow where she meets a mysterious Englishman.  He turns out to be exiled double agent Guy Burgess, one of the notorious Cambridge Spies.  Bennett's play reimagines the real conversations they had on all sorts of subjects, exploring Burgess' extreme homesickness and his motives for betraying his country.  Charles Grey also appears.  Bennett's fascination with the Cambridge spy ring continued in "A Question of Attribution" (1991), also directed by Schlesinger.  In that play, James Fox plays Sir Anthony Blunt, who served as Surveyor of the Queen's Pictures even after his private confession of espionage.  "A Question of Attribution" imagines a conversation between the spy and the Queen (Fawlty Towers' Prunella Scales). Geoffrey Palmer (Tomorrow Never Dies) also appears.  These two plays and eight others were released on R2 DVD in Britain as Alan Bennett at the BBC; the same collection will be released here as An Englishman Abroad - The Alan Bennett Collection. And of course this announcement comes right after I imported the UK version! D'oh.
Posted by Tanner at 11:34 PM