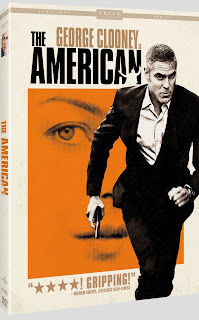 DVDActive reports that Universal Home Video has announced DVD and Blu-ray releases of the George Clooney assassin thriller meditation The American for December 28–another birthday present for me!  I'm really glad the studio has the courage to stick with that awesome theatrical poster art and not just stick a bluish close-up of Clooney's face on the front instead. Extras on both versions will include deleted scenes, an audio commentary with director Anton Corbijn, and a featurette called (rather uncreatively) "Journey to Redemption: The Making of The American."  Retail is $29.98 for the DVD and $39.98 for the Blu-ray, but of course you won't have to actually pay those prices if you shop around. While I didn't find The American to be quite as profound as it seemed to think it was, I really liked it nonetheless.  It's not fast-paced, but it does offer lots of beautiful location photography, which is a crucial element for me in good spy and assassin movies.
Posted by Tanner at 2:10 PM

went to see the movie yesterday in Belgium (only came out here) . Still don't know what to think 'bout it, not bad , but something is missing .
was he a spy / secret agent ? hitman ? part of a criminal organisation ?
did they want to kill because he wanted to retire/resign ?
the guy next to me fell asleep :)

I can understand why someone would fall asleep. And it definitely doesn't answer those questions-and didn't really leave me thinking about them too much afterwards, either. But I still liked the movie. I've got posted all my thoughts in a review that's been mostly finished since I saw the film, and I finally completed. Feel free to chime in again on that post!