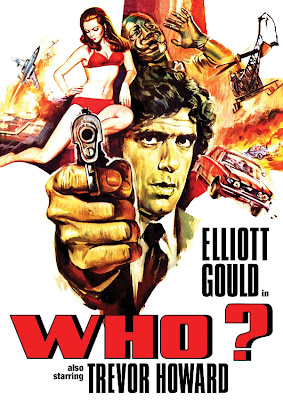 You do! What? Remind me of the babe. What babe?  No!  Sorry; I'm being silly.  Forget all that.  I'm talking about something else altogether.  And not Doctor Who either, just Who?, with a question mark.  (Not to be confused with What?, an alternate title of Mario Bava's The Whip and the Body, or Don't, Edgar Wright's fake trailer in Grindhouse...)  We first heard about a DVD release of Who? from Code Red two years ago, but that never happened.  Now, DVD Drive-In reports that the 1974 Cold War spy-fi movie starring Elliott Gould and Trevor Howard is finally coming to DVD–next week!–from Scorpion Releasing. (Which I believe is in some way affiliated with Code Red.) The plot mixes espionage and robots–but in a very gritty, serious, Seventies way, not a Sixties Casino Royale/Some Girls Do Way, if you can believe it. Scorpion's DVD will contain a plethora of bonus features, including separate audio commentaries with director Jack Gold and star Elliott Gould, an interview with co-star Edward Grover and a brand new 16x9 (1.78:1) widescreen transfer. Retail is $19.95, though it can be pre-ordered for less on Amazon.
Posted by Tanner at 12:05 AM

Based on the 1958 Cold War SF novel of the same name by Algis Budrys...

Tex
(who owns the book and wants the movie)

Thanks for the additional detail! So it's a good book?