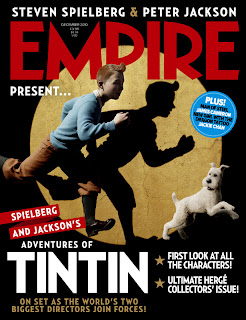 While it would seem that the director is tied up for the foreseeable future in Middle-Earth, Peter Jackson is also contemplating his follow-up film to Steven Spielberg's inaugural CGI Tintin movie.  Jackson produced Spielberg's entry and the initial plan was for Spielberg to then produce a sequel directed by Jackson, and finally for the two maverick directors to team up on a third film.  All talk of sequels has been quiet of late, but the first movie (which features Daniel Craig in its voice cast and is due for release in late 2011) is the subject of a profile in the latest issue of Empire Magazine in which Jackson finally breaks his silence on sequels.  After first mulling the Herge story The Seven Crystal Balls, he adds, "I also really like the Eastern European ones, the Balkan ones like King Ottokar’s Sceptre and The Calculus Affair. I think it’s a terrific setting for a thriller, the weird Balkan politics and the mysterious secret service agents."  Sounds cool.  Personally, I haven't read many of Herge's Tintin adventures, but I know it's John Steed's favorite comic, and that's good enough for me!  I'm looking forward to the films.
Posted by Tanner at 12:57 PM