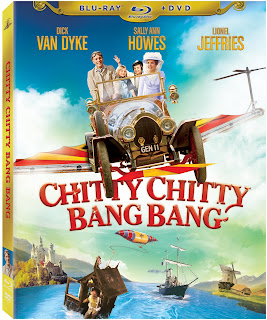 New Spy-Related DVDs And Games Out This Week
No straight-shooting spy titles out this week, but quite a few spy-ish DVDs.  Plus, of course, a few videogames that have a lot of Bond fans excited.

First up, from MGM Home Entertainment, is the1968 film musical adaptation of Ian Fleming's children's book, Chitty Chitty Bang Bang, on Blu-ray/DVD and DVD/Blu-ray combo packs.  Chitty Chitty Bang Bang was produced by 007 producers Albert R. Broccoli and Harry Saltzman, scripted by You Only Live Twice screenwriter Roald Dahl and counts Bond alums Desmond Llewelyn and Gert Frobe among its cast. Dick Van Dyke stars as inventor Caractacus Potts, and Sally Ann Howes plays the Bond Girlishly-named Truly Scrumptuous. The new combo release comes in two configurations: a BD/DVD combo pack in a Blu-ray size case, and a DVD/BD combo in a more kids' section-friendly standard DVD Amray case.  All of the special features are on the Blu-ray.  The only new ones (besides the high-def transfer, of course, and newly upgraded 7.1 audio) are kid-oriented (“Toot Sweet Symphony melody maker – the Toot Sweet Toots Musical Maestro" and “Chitty's Bang Bang Driving Game”), but happily all of the interviews and vintage promotional material from the last DVD edition is ported over, including "Remembering Chitty Chitty Bang Bang with Dick Van Dyke," the featurette “A Fantasmagorical Motorcar” (about the actual car used in the film and its current owner, if memory serves), the original Sherman Brothers demos of the film’s most popular songs, vintage featurettes including “The Ditchling Tinkerer,” “Dick Van Dyke Press Interview,” and “The Potts Children's Featurette,” a photo gallery and a vintage advertising gallery including English and French versions of the theatrical trailer and several television spots. There's also a sing-a-long version of the film for the tots. Both combo variations retail for $34.99, but are available considerably cheaper from Amazon and other online vendors. 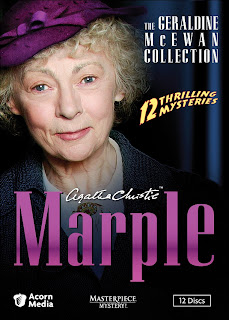 An old woman detective may not seem very spy-like at all, but there's actually plenty in Agatha Christie's Marple: The Geraldine McEwan Collection, from Acorn Media, to interest spy fans.  First and foremost, there's Timothy Dalton (in The Sittaford Mystery), who leads a pack of spy-friendly guest stars that also includes Joanna Lumley, Jane Seymour, Keeley Hawes, Herbert Lom, Gugu Mbatha-Raw, Richard Armitage, Jane Asher, Robert Powell, Tim McInnerny, Mark Gatiss and many, many more.  (Besides being an actor, Gatiss is the co-creator of the BBC's new Sherlock series and author of the wonderful Lucifer Box spy novels.) This set includes all 12 feature-length mysteries that McEwan starred in on 12 DVDs, plus plentiful extras including an hour-long "backstage" documentary with cast and crew interviews, behind-the-scenes featurettes, a history of Miss Marple adaptations (that sounds fun!), photo galleries, an Agatha Christie biography, and cast filmographies. Retail is $99.99.

It's a good week for Timothy Dalton fans, because in addition to his debut on Chuck, we also get the aforementioned Marple DVD set and Toy Story 3, in which he voiced the adorable stuffed hedgehog with delusions of Shakespearean grandeur, Mr. Pricklepants.  It's not a huge part, but it's great to hear a hedgehog talking like Timothy Dalton.  Plus, Toy Story 3 is an amazing movie.  I think it's my favorite of the Pixar trilogy, and one of my favorite movies of the year.  It's available on standard DVD, Blu-ray and a 4-disc Blu-ray/DVD Special Edition Combo pack. For the huge Disney fans out there, it's also available as part of the massive, 10-disc Toy Story Trilogy Blu-ray/DVD combo set. That one will cost you dearly, though, so you might want to save it for Santa. 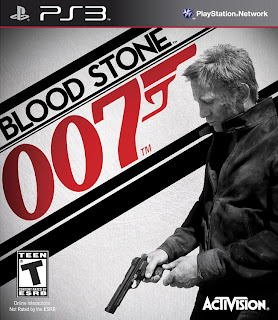 There are also two new James Bond videogames out today: James Bond 007: Bloodstone and GoldenEye 007, the latter a remake of the classic N64 first-person shooter of over a decade ago (though not from the same makers).  I don't really cover videogames here simply because I don't play them.  I'm no good at them.  I kind of wish I was, though (and that I had the hours required to devote to them, but I'm afraid this blog takes up all of those!), because these games both look pretty neat based on the trailers.  Both star Daniel Craig, which in the case of GoldenEye is pretty weird, since Pierce Brosnan, of course, starred in the movie. 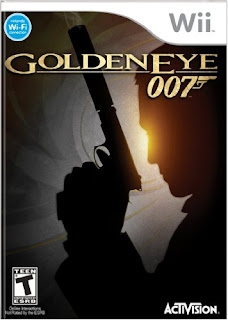 The new GoldenEye 007 should actually hold interest for Bond music fans as well as Bond gamers, because David Arnold composed the score.  I'm really curious to hear it.  The movie GoldenEye has one of the worst Bond scores, by Eric Serra, and I've often fantasized about what an Arnold score might have been like for it since he did all the other Brosnan Bonds.  Now I guess we can find out!  I really hope that the score is released in some format, be it on CD (unlikely, I guess) or at least as a digital download.  The one part we can hear so far struck me as a tad disappointing.  Pussycat Doll Nicole Scherzinger steps in for Tina Turner to cover the movie's original title song, penned by U2's Bono and the Edge.  With David Arnold producing the cover, I was hoping for something along the lines of his fantastic 1997 Bond covers CD, Shaken and Stirred, which paired classic songs with unexpected performers for uniformly impressive results.  Unfortunately, instead of an indie artist of the caliber of Aimee Mann or Natacha Atlas, we get a Pussycat Doll.  And Scherzinger simply doesn't have the vocal chops to deliver an interesting or worthy rendition.  Too bad.  I did like the orchestration, but was a bit taken aback at how familiar it sounded.  Based on Shaken and Stirred, I'd expected a more radical reinvention.  Oh well.  I hope the score is good, and for people who are into first person shooters, I hope the game is good too!  Let me know.
GoldenEye 007 retails for $49.99 for the Wii, $29.99 for the Nintendo DS and $69.99 for a special edition of the Wii version that comes with a special Golden Gun controller.  James Bond 007: Bloodstone retails for $59.99 for the Playstation 3 and Xbox 360 versions, and $49.99 for PC.
Posted by Tanner at 2:10 AM