Repost: Zodiac Review
Continuing this week's blogiversary celebration, here's another repost.  This review seems worth spotlighting largely because of the fact that I seem to be in the minority in my opinion of this breezy, entertaining show–and I'd like to change that!  Personally, I really, really enjoyed it, and it's stuck with me long after my initial viewing almost a year ago.  Avengers fans in particular should seek this one out.  Here's the first part of the full review: 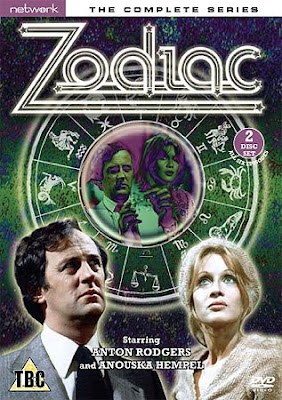 If Roger Marshall, the man often credited with introducing the trademark wit to The Avengers, felt that he still had unfinished business when he left that show (supposedly due to being fed up with Brian Clemens), then Zodiac was his opportunity to finish it. In 1974, Marshall created Zodiac for Thames TV: a hip, current series about a police officer teamed up with an astrologer. To me, the premise didn’t sound very promising at first. It brings to mind any number of dreary, subsequent American shows about police working with all manner of psychics, swamis, mystics and ghost whisperers. Luckily, Zodiac is nothing like those shows. Its premise is a mere jumping-off point, not its raison d’etre. The heart of Zodiac, like The Avengers, is the relationship between two unique and appealing characters: aristocratic male cop David “Grad” Gradley (Anton Rodgers), and beautiful, liberated female astrologer Esther Jones (Anouska Hempel).

Gradley is a very Steed-like upper-class copper (he has to be a working policeman in order to keep his inheritance thanks to a convenient clause in his father’s will). In fact, so long as one can overlook his appalling, standard-issue “Seventies British TV haircut” (when I was little, I used to think those do's had to be part of the joke on Faulty Towers and Are You Being Served?) and his questionable fashion sense (Steed might well go overboard with the cravats–especially in The New Avengers–but he would never show up at Mrs. Peel’s apartment wearing all denim!), Rodgers makes a wholly satisfying Steed surrogate. He shares Patrick Macnee’s seemingly effortless charm, self-effacing good humor and readiness with a witty comeback when verbally sparring with Hempel (who always addresses him as “you arrogant man!”). And Hempel herself, fresh off of her sex siren phase in movies like the entertaining spy farce Tiffany Jones and Russ Meyer’s plantationploitation flick Black Snake, actually makes a totally credible Mrs. Peel stand-in, quickly proving that her acting skills are, in fact, more than the sum of her breasts, and revealing an adeptness at witty banter that she never had the opportunity to demonstrate in her films. The New Zealand-born Hempel (with whom I must confess a minor infatuation ever since first reading her irresistibly exotic name) actually had quite an illustrious spy career, but the roles in which she kept her clothes on were generally (and quite unfairly, as evidenced by Zodiac) marked by their brevity. After appearing as one of the many girls (the Australian one) at Blofeld’s clinic in On Her Majesty’s Secret Service, she went on to mostly small roles in Department S, The Persuaders!, The Adventurer and eventually a slightly larger one on Return of the Saint. The scant six episodes of Zodiac make it clear that she should have worked more in the Seventies.

Hempel’s Esther is a suspect in the first episode (“Death of a Crab”), but quickly befriends the urbane gadfly Gradley. It looks at first as if their relationship might be romantic (ala Moonlighting), but the final scene of the episode twists it into a friendship with plenty of sexual tension, ala Steed and Mrs. Peel. Even so, the sparks continue to fly through subsequent episodes, and it’s quite disappointing that the two should-be lovers don’t even come together in the finale. Of course, one has to assume that Marshall intended for the show to go on beyond that point, and understood from his tenure on The Avengers that the tension could propel it much better as an ongoing series than a relationship ever could. Anyway, Esther writes horoscopes and does astrological readings (and, apparently, palmistry) for high-end clients. Judging by her apartment, she seems to make a pretty good living at it. Despite insisting to Gradley when they first meet that “I’m an astrologer, not a spiritualist or a medium,” Esther seems to possess whatever sort of psychic powers any given episode calls for. In one she reads Tarot cards, and she frequently demonstrates hints of second sight. Gradley is an open-minded skeptic, the Scully to her Mulder. He may be skeptical, but he keeps her around long after “Death of a Crab,” and finds her skills useful. That said, it’s interesting to note that none of the episodes actually depend on astrology really working to for the mystery to be solved. Esther is a smart lady, and her deductions could be right for reasons other than the stars. But the show is open-ended enough to please skeptics and believers alike. Besides getting our leads together, “Death of a Crab” is a notable episode for the appearance of a very young–and beardless–John Rhys-Davies, already able to convey effortless authority in his sonorous voice even so early in his career.

Most episodes, in fact, feature notable guest stars. (Or, more often, guest stars who went on to become notable after the series.) Michael Gambon turns up in “The Cool Aquarian” as a ruthless (or is he?) business tycoon. His ruthlessness is quickly demonstrated by his readiness to burn up a rare stamp for which he’s just laid down £30,000. When his aghast lackey points out the value, Gambon says he hasn’t lost £30,000; he’s just made £20,000. There were only two such stamps in the world, and now there iss only one, which he owns, so it’s now worth more. Hm, I’m not sure I buy his logic. Couldn’t he have just hidden the extra and achieved the same effect? Anyway, apparently he’s pretty ruthless. Which is why it seems odd that a kidnapper abducts a teenage girl from a poor family and then sends his ransom note to Gambon’s millionaire businessman. Will such a man part with his beloved cash to save the life of a girl he has no connection to? And why was he the target anyway? That’s what Gradley has to figure out, and once again he turns to Esther for help. Aiding matters, it turns out that Gambon is a client of hers. In fact, it turns out that almost all suspects and victims of crime in all of London are clients of hers, which proves very convenient throughout the series.

The actual plot of each episode (although they do generally come together in a satisfying manner) is pretty much immaterial. The reason to watch the show is for the hugely entertaining, Avengers-like chemistry between the two leads. The banter is better than the cases. And there’s plenty of banter on display–and humor....

Click here to read my entire Zodiac review.
Posted by Tanner at 9:42 AM

I have been wanting to watch this again for about 35 years! And someone's finally put it out on DVD! Excuse me, while I run round the room several times, punching the air... I seriously have to have this. The memory of Grad coolly not batting an eyelid while the volcanically hot Ester Jones crawled all over him. And it's available in about two weeks! All other tasks scheduled for September can wait till October.
John in Yorkshire