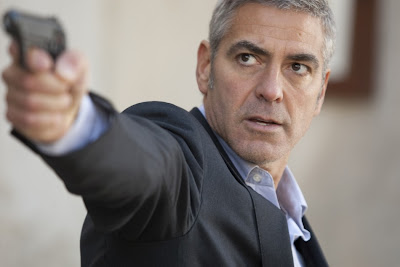 George Clooney Looking To Be Soderbergh's Man From U.N.C.L.E.?
Film to be set in the Sixties!
The Playlist reports (via AICN) that George Clooney is (unsurprisingly, I guess, given their history of collaboration) circling the Steven Soderbergh-helmed incarnation of Warners' long-in-development Man From U.N.C.L.E. movie that we first heard about yesterday.  And, more excitingly, the website also reports that Soderbergh plans to retain the TV show's 1960s setting!  The Playlist seems like a fairly reliable source when it comes to Soderbergh; they were the ones who first reported that his upcoming spy movie had changed its title from Knockout to Haywire and that it had been delayed until next spring.  The Sixties setting really, really excites me!  I hope this movie is serious(ish) and not a parody, because I would love to see a modern action movie set in that period.  We've already had great parodies in the form of the two recent OSS 117 films, but could Matthew Vaughn's upcoming Sixties-set (and Avengers-inspired) X-Men prequel foretell a new trend of period action movies?  I sure hope so!

George Clooney's potential attachment excites me less than the time period.  Don't get me wrong; I love Clooney, and I'd love to see him play a superspy.  But he's really too old to be Napoleon Solo.  (He's almost as old as Robert Vaughn was in the reunion movie The Return of the Man From U.N.C.L.E.: The Fifteen Years Later Affair!)  I'd much rather see Clooney play Matt Helm.  Of course, just because he's planning to star in the movie doesn't necessarily mean that he'll be playing Napoleon Solo.  After all, Tom Cruise starred in Mission: Impossible, but he wasn't Jim Phelps.  I doubt that Clooney is signing up to be Mr. Waverly, but I suppose it's possible that he could be another U.N.C.L.E. agent or, if this movie really is, as The Playlist asserts, taking U.N.C.L.E. back to "its roots," perhaps a mentor to a younger Solo and Kuryakin.  Anything is possible at this point.  What I do like about a potential Clooney/Soderbergh team-up is that it would seem to indicate a tone along the lines of their Ocean's 11 remake, which I think would be pretty appropriate for The Man From U.N.C.L.E.  And if Clooney really is playing a fifty-year-old Solo, well, that's not that bad.  There are much worse choices out there!  (And he certainly proved in The American that he's in top physical shape for his age.)

Previous Clooney/Soderbergh spy collaborations include The Good German (which I remember liking quite a lot, but needed to re-read my review to remember anything that actually happened in it!), Syriana and Confessions of a Dangerous Mind.  (Soderbergh didn't direct the latter two, but they were produced through his and Clooney's Section 8 Films.)  At one point, they had hoped to team up on a Matt Helm movie more in keeping with the Dean Martin movies than the serious Donald Hamilton novels, and I believe that was also meant to be Sixties-set.  Clooney's most recent spyish movie was The American (review here).  Bear in mind that while a script is being written by Scott Z. Burns based on Soderbergh's take, nothing is yet set in stone about this Man From U.N.C.L.E. movie, and plenty of other incarnations over the years have fallen by the wayside.
Posted by Tanner at 1:40 PM

Kinda defeats the "remake" part if they set the film in the '60s. I love Clooney and would deal if he were playing Solo but it limits how many sequels he could be in, or how quickly he would be replaced.

Oh, yeah, I'd definitely deal with Clooney! It really wouldn't be a problem for me. I was just remarking on the huge age difference between him and Vaughn, who was really quite young when he originated the role.

Oh Robert Vaughn was great in The Man From Uncle and still playing a great part in Hustle. Clooney sounds OK for the role but now the really big question is who'll play Illya Kuryakin?