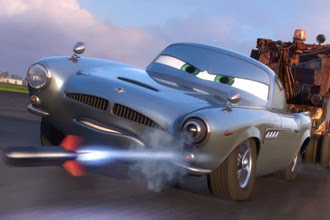 Hm.  The first Cars was one of the few Pixar movies I never saw.  The trailers and the basic concept just didn't really grab me.  But the trailer for the sequel certainly does, for obvious reasons!  Pixar has decided to introduce spy cars into the mix.  Michael Caine plays Finn McMissile, a superspy car who looks kind of like James Bond's classic Aston Martin DB5.  (None of the cars of Cars seem to actually be based on real makes or models, though.) This could be fun, and will definitely spawn some very cool toys.  (After all, spy cars are the coolest toy cars!) Dark Horizons reports that Jason Isaacs and Emily Mortimer also join in on the fun as spy jet Siddeley and spy-in-training Holley Shiftwell, respectively. The animation definitely (and unsurprisingly) looks better than that in the upcoming Sean Connery CGI movie, which also features an animated spy car.  Pixar regular Randy Newman scored the first Cars, but from the look of this one, I really hope they tap their other go-to guy, Michael Giacchino (The Incredibles, Alias, Mission: Impossible III), to score the sequel!  Spies (and presumably their cars) are certainly in his wheelhouse...

Cars is one of my favorite Pixar films -- and I'm a girl! I too am extremely excited that sequel will be about spy cars. Definitely want to see this one in the theater!

Thanks for the recommendation! I guess I should check out the original. I definitely will before the sequel hits!