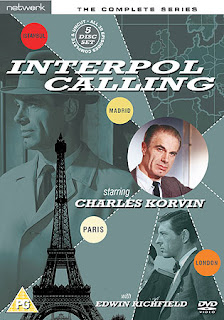 Network will unearth another early spy(ish) gem from the ITC vaults next month, the complete 1959-60 series Interpol Calling.  I see Interpol shows like this and The Man From Interpol (and I think there were others, too) as the not-so-missing link between the detective shows popular in the Fifties and the spy shows that dominated in the Sixties.  A jetsetting detective, who, in this case, covers ground from London to Paris to Mexico to Sweden to the Himelayas to Swiss ski resorts, is basically a spy in all but the particulars of the cases he handles.  And at the height of the Cold War, it was inevitable that even those sometimes veer into the realm of international intrigue. Spy plots on Interpol Calling ranged from dead NATO couriers found in sleeping compartments on the Orient Express to South American coups d'etat to political assassination to the usual (for that era) escaped Nazi war criminal plotlines. But for me, the jetsetting is one of the most important aspects of a spy show, and Interpol Calling had that in spades–in the stages-and-stock-footage ITC manner, anyway. Network describes the series thusly:

World crime is his target. Intelligence and style are his most deadly weapons. When Interpol’s Inspector Paul Duval is on the case, international criminals are on the run. Tracking his targets from searing sand dunes near the equator to icy peaks at the ends of the earth, the unstoppable investigator risks his life daily in a global race against time. He has the persistence of Columbo and the style of Holmes – and not even the most elusive fugitive can hide when he is on the hunt. Hungarian-born Charles Korvin stars as the intrepid Paul Duval, while Edwin Richfield is fellow Interpol investigator Mornay in this classic ITC series.

This release contains all 39 half-hour, black-and-white episodes, which originally aired in 1959 and 1960. Special features include Network's usual "extensive image galleries" and PDF material, the latter of which can sometimes prove much more interesting than it sounds.

Interpol Calling: The Complete Series will retail for £49.99 but will be available to pre-order for £10 less from Network's website beginning tomorrow (December 1).  It starts shipping the following week (December 8).
Posted by Tanner at 4:50 PM

This one looks good.