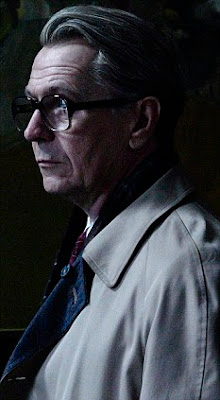 The Daily Mail has revealed what I think is the first photo we've seen of Gary Oldman in character as John Le Carré's famous spycatcher George Smiley.  It's accompanied by a very interesting interview with Oldman by Baz Bamigboye.  The whole thing, in which Oldman discusses banishing the ghost of Alec Guinness (whom he's always admired), is well worth reading, but here are some choice excerpts.  On the subject of filling famous shoes, the actor is pragmatic.  He knows his Smiley history, and reminds us that there have been more Smileys than just Guinness. "I'm 52," Oldman tells Bamigboye. "Let's say I'm playing 55. There have been many Smileys, so he could be all things. I know in the book he's described as a short fat man, but he can be Denholm Elliott, he can be Alec Guinness, he can be James Mason - and he can be Gary Oldman, I think." (The photo clearly looks closest to Guinness, however.  Honestly, I'm surprised they gave him the same hair!) Oldman also describes how he selected Smiley's eyewear at a vintage glasses store in Pasadena.  "Glasses are funny things," he muses. "For Smiley, they're iconic. It's like the Aston Martin or the Martini, shaken not stirred." That comparison made me smile.  I like Oldman's attitude, and I like that he's got a sense of humor about it all as well as a deep respect for his famous forebear.  Like James Bond, George Smiley is a character open to many interpretations, and I get the idea that Gary Oldman will be a good one.

Head on over to The Daily Mail to read all of Oldman's thoughts on his latest role.
Posted by Tanner at 3:14 AM