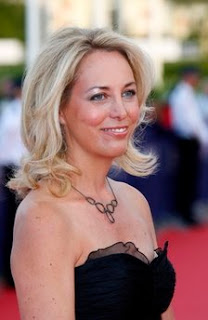 The AP reports that Valerie Plame Wilson (who previously penned the memoir Fair Game) is following in the footsteps of other famous spies-turned-novelists like Stella Rimington, John Le Carré and Graham Greene.  The outed CIA covert operative is collaborating on a spy novel with mystery writer Sarah Lovett (Dark Alchemy).  "I was always irked by how pop culture portrayed female CIA operatives," she tells the AP. "I wanted to write a thriller that was more realistic." Plame Wilson singles out Alias in particular as lacking realism.  (What?!  You mean real spies aren't always related to or in love with one another? While piecing together ancient doomsday devices?  I'm shocked!)  She did apparently look up to Jennifer Garner in one respect though. "I used to look at Alias," she says, "[a]nd I'd say to myself, 'I wish I had that body!'" Well, now she kind of does: Plame Wilson is played by the gorgeous Naomi Watts in Doug Liman's new movie based on her book, Fair Game ("It could be worse," she jokes) and another stunning blonde, Kari Machett, plays a character seemingly inspired by her on USA's Covert Affairs.  Plame Wilson serves as a technical advisor on Covert Affairs, which is produced by Liman.  Fair Game, which I've been very excited to see ever since The Hollywood Reporter reviewed it at Cannes audaciously declared that it "might be one of the best spy movies ever," opens tomorrow. See the trailer here.
Posted by Tanner at 12:42 PM