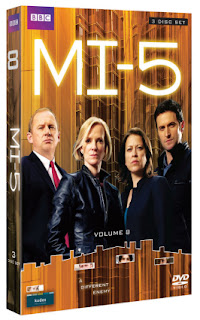 I have to admit, I was getting a little bit concerned about this, since we usually get a press release before now.  But it's here now, and TVShowsOnDVD has all the news: like clockwork, MI-5: Volume 8 (aka Spooks) is coming out in America on January 25, 2011.  The 3-disc set contains eight episodes and a handfull of special features including commentary tracks on the premiere and finale and two behind-the-scenes featurettes: "Acting the Fall" and "The Flat Explosion."  I love MI-5 and I start getting really jittery for it around this time of year.  I'm glad to hear I'll get my fix, as usual, in January! Retail is also lower than on previous seasons at a much more attractive $39.98 (which means it can be pre-ordered on Amazon for an even more reasonable $27.99).

But that's not all.  TVShowsOnDVD also points the way to the BBC America Shop Blog, where the company announces that they'll be breaking with the every January release pattern after Volume 8–and for the better.  American fans won't have to wait a whole year to see the episodes that British audiences are watching on TV right now.  Instead, we'll get MI-5: Volume 9 as early as next summer!  Excellent news.
Posted by Tanner at 5:06 PM