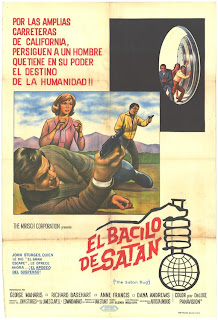 If you ever see a headline these days about any vintage catalog title coming out from a major studio that isn't The Wizard of Oz or Gone With the Wind, you can bet it's probably an MOD (Manufactured On Demand) title, ala the Warner Archive.  I've weighed the pros and cons of this trend plenty in the past, but despite enabling the studios to charge twice what we paid before for a cheaper product with no special features, the upside is that the MOD format means we're at least getting some catalog releases, which isn't gonna happen any other way in this pitiful market.  (I've said it before and I'll say it again: I blame Blu-ray as much as I blame the economy for this sorry state of affairs.)  At least MGM is sweetening the deal on MOD titles a bit.  They're now expanding their titles' availability to more retailers (they were previously available only through Amazon), possibly even to brick and mortar stores who are interested.  (That bit's a little unclear from the press release, but it seems like physical retailers who have websites, like Borders and Barnes & Noble, will definitely be part of the equation.)  Furthermore, they're including theatrical trailers on their titles when they have the elements available.  I know, it's not much in terms of special features, but at least it's something.  And a pretty important something at that; I always like watching the trailer when I get a new DVD.  Anyway, MGM has announced an aggressive expansion of their "MGM Limited Edition Collection" of MOD titles.  The studio plans to release over 400 new-to-DVD titles in the next 18 months.  Among those in the first wave, available in December, is the 1965 Alistair Maclean spy movie The Satan Bug (review here). John Sturges directed what the studio describes as a "sizzling suspenser about a nerve-racking chase to recover flasks of a lethal virus which were stolen from a government lab by a deranged and dangerous scientist, who has decided that now it is his turn 'to play God'..."  Read my review to discover that I found it anything but sizzling, but I know that the movie has its fans, and you won't find me arguing with the release of more Sixties spy movies on DVD! The first-rate score, by Jerry Goldsmith, has been available for a while from FSM.
Posted by Tanner at 4:31 PM