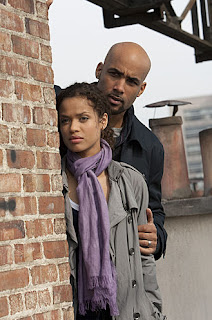 So much for that additional script order we just heard about. Deadline reports that NBC has cancelled the J.J. Abrams spy series Undercovers.  I doubt anyone will miss it too much.  I've been a dedicated viewer from the start, watching every episode (actually I'm one behind, but it's on the DVR), and as the closest thing to a devout follower that I can imagine the show has, I know I probably won't give it a second thought.  The show just never clicked.  Sure, I like it.  I like it enough to watch it, but I'm pretty easy that way when it comes to spies.  I don't like it enough to miss it.  I enjoyed the pilot and thought the show had promise, but sadly it never lived up to that.  Hints of an overall conspiracy involving Samantha's sister and the real reason the CIA reactivated the Blooms have remained just that: hints.  Which is pretty frustrating five or six episodes in.  And, sadly, the writers still haven't figured out how to successfully play off the romantic and spy angles of the series in a way that generates either suspense or sexual tension.  And they continue to desperately try to sell us on these two characters being deeply in love by just showing them having sex in the first scene of every episode (well, technically showing them either about to or just after; this is, after all, a family show airing at 8PM!) instead of using the tried and true method of giving them witty, flirtatious banter to exchange, a trick that's served Hollywood well since its Golden Age. I have little doubt that lead actors Boris Kodjoe and, particularly, Gugu Mbatha-Raw would have any difficulty pulling that off if they actually got decent banter to wrap their tongues around, but they haven't.  The best aspects remain the comic relief supporting spy cast members Ben Schwartz and scene-stealer Gerald McRaney. (The guy who played Leo never clicked at all and threw off the stars' chemistry, but his absence last week would seem to indicate that the producers realized that.)

Undercovers' cancelation marks a rare strikeout in the spy genre for J.J. Abrams, who co-created the series, co-wrote its first two episodes, co-wrote the theme music and directed the pilot.  He'd previously been batting 1000 in the espionage milieu, having created Alias and directed Mission: Impossible III. Luckily, Abrams already has more spy projects in the pipeline, including a fourth Mission: Impossible movie, which he's producing, and another stab at an NBC series.

As for Undercovers, all thirteen episodes of the initial order will be produced.  The trade blog reports that the twelfth is currently before cameras.  According to Deadline, "The series will stay on for the next 2 weeks and will air its last original (for now) on Dec. 1. It was already set for a preemption on Nov. 24 when NBC is airing a DreamWorks Animation holiday special. The fate of the remaning original Undercovers episodes is unclear."  They'll probably be burned off on Saturday night or filling in temporary gaps in the network's schedule, I imagine.  But even if they never air, I have little doubt that Warner will release "The Complete Series" on DVD soon enough.  And of course I'll buy it.
Posted by Tanner at 1:58 PM

I confess, though I enjoyed the first two episodes, it wasn't MUST WATCH material. I probably would have kept watching if I'd had the time. (And if every one of the other fall shows hadn't bored me to tears.)

I did notice that they constantly tried to play portions of the show (particularly the bedroom scenes) like Hart to Hart, which is not entirely bad, though it made me view Undercovers as a Hart to Hart knock-off. Of course it could never live up, as it lacked the witty banter and the two leads didn't really seem very in love...

Ahh, well. With Burn Notice and Human Target coming up, my action cravings will be truly satisfied once again. ;D