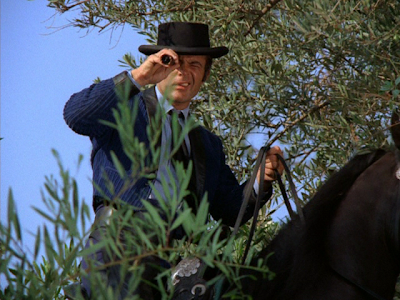 Wow.  Even in this age of remakes and reboots in which we live, this I did not see coming.  In fact, it's the most out of left field spy remake news since the story broke that Guillermo del Toro was making a Champions movie.  (I suppose that project, which was set up at United Artists, is stuck in the whole MGM quagmire.)  Anyway, Deadline reports that CBS, presumably high on the success of their Hawaii Five-O redo, are resurrecting another Sixties staple: the awesome Spy/Western hybrid The Wild Wild West.  This is just... wow.  I don't know what to say.  I'm not against it, because I love The Wild Wild West (review here) and done right, a new version could be awesome.  But I will remain cautiously optimistic about this endeavor, given that we've already witnessed what can happen when this franchise is done poorly in the excreble 1999 Will Smith movie version.  (Which, in my opinion, managed the momentous feat of being the worst movie based on a Sixties spy show out of a whole heap of strong candidates.)  However, that bad revival attempt actually leaves me rooting for this new one more.  That can't be the final word on James West and Artemus Gordon!  I want something even just a little bit better to erase its wretched memory.

Guiding this new CBS version, according to the trade blog, are former CSI executive producer/co-showrunner Naren Shankar and Battlestar Galactica developer/executive producer Ron Moore.  I'm not familiar with Shankar's work, but Moore is an interesting choice.  He's already masterminded a very successful TV remake (to my mind the best TV remake we've yet seen), but he did so by dramatically altering the established formula.  Is that what we can expect from his Wild Wild West as well?  The Avengers-y tone of the original, which I adore, is so of-its-time that it would be very tough to nail today.  (I  know first-hand that most development executives today simply don't get that tone.  Whether or not this accurately reflects audience sensibilities, I can't say.)  Furthermore, Battlestar Galactica offered no indication to me that Moore has the comedic sensibility to replicate that tone.  So unless the guy's got a hitherto unrevealed funny bone, it seems it would be reasonable to guess that his version of The Wild Wild West might be as different from the original as his Battlestar Galactica.  And, honestly, a serious dramatic approach to the premise of two Secret Service agents traveling the Old West might be really cool.  (Just as long as we still get some version of Dr. Miguelito Loveless!)  So would a comedic one, though, if these creators can pull that off.  I'm excited.  Shocked, but excited.  Original series star Richard Hatch ended up being a big part of the new Battlestar (despite his initial reaction to it), so is it possible that Robert Conrad, who famously demonstrated his disgust with the movie version of The Wild Wild West by gleefully accepting its Razzies, could be a part of the new Wild Wild West?  I hope so. That would be awesome!

I'm surprised that we're seeing The Wild Wild West revisited before other spy series that would seem to lend themselves better to today's marketplace, like I Spy or Danger Man or even The Avengers.  (I'd actually totally be on board with a third TV take on The Avengers–especially if Brian Clemens were somehow involved.)  But I think that the Sixties spy show that would by far and away work the best on today's television screens is Mission: Impossible.  And that's another CBS show!  Really, CBS, as long as you're so into remaking past hits, take a serious look at that one.  I'm sure that the movie rights-holders are probably resistant to a move that they might see as dilluting their brand, but I don't see any reason why a TV series and film series couldn't run concurrently.  They could take place in the same world and the movies could continue to focus on big, stunt-heavy adventures, while the TV show (with different leads, of course, but perhaps a few familiar supporting cast members) could explore smaller stories more akin to the original TV version, focusing on heists and cons.  It would be similar to cable hits like Leverage or even Burn Notice, but with cooler theme music!  Finally, the Mission: Impossible concept, always team-based, is not as tied to a star as The Wild Wild West or even Hawaii Five-O.  (That remake would be great if they'd only managed to find a lead with half the charisma of Jack Lord.)  Obviously the great Peter Graves is deservedly most associated with it, but he didn't even come aboard until the second season, and obviously he hasn't been a part of the movies.  (Grumble, grumble.)  Mission: Impossible makes perfect sense to revisit on TV.

If you've never seen the original Wild Wild West, take some time to get acquainted with it on DVD before this new one happens.  If you like Sixties spies, you'll be well rewarded!

Read my review of The Wild Wild West - The Second Season

No! Say it ain't true! Wasn't the Five-0 remake bad enough? Alex O'Loughlin is no Steve McGarrett and I doubt if they'll be able to find a suitable Artemus Gordon. (A suitable James West might not be quite as difficult to find.)

I could handle a new Mission: Impossible. I don't like WWW near as much as M:I, but there's just something wrong with trying to remake it.

Tex
(for once, I agree with Picard)

I'm definitely not against a new Wild Wild West the way you guys (and apparently Picard) are. The way I see it, after the movie the franchise has nowhere to go but up. Whatever happens would have to redeem the brand a little bit! And the more I think about it, the more intrigued I am at the notion of a serious take. (Not that we know that's what Moore is developing!) I LOVE the tone of the Sixties show, but we've seen it and it would be near impossible to duplicate and DEFINITELY impossible to improve upon! But I've never seen a serious take on secret agents in the old west, and I'm intrigued. It could still retain the original "James Bond in the Old West" premise, but based on the grittier contemporary James Bond instead of the Sixties version. COULD be neat. Could also go horribly wrong, of course....